Weep for the Unborn Children 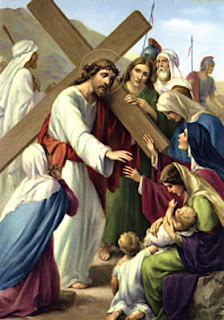 Daughters of Jerusalem, do not weep for me; weep instead for yourselves and for your children, for indeed, the days are coming when people will say, ‘Blessed are the barren, the wombs that never bore and the breasts that never nursed. – Luke 23:28-29

It was a Wednesday that I went to the Adoration Chapel and decided to pray my scriptural Rosary.  The verse for the bead had the beginning of the above: Do not weep for me… but for your children.  Yet I was compelled to read further, so I turned on my Bible application and was dumbfounded.  It hit me in that very moment that we are in the midst of the days when people are “blessing” the “barren, the wombs that never bore and the breasts that never nursed.”  As I picked my Rosary back up and continued to pray the mysteries of the Passion of our Lord, I did begin to weep.

On September 1, 2021, the state of Texas enacted Senate Bill 8, more commonly known as “The Heartbeat Act” which states that “a physician may not knowingly perform or induce an abortion on a pregnant woman if the physician detected a fetal heartbeat for the unborn child.”  Once news broke that the bill was passed, a social media frenzy began, and news feeds were flooded either supporting the enactment of the bill by pro-lifers or denouncement of the bill and expressed disappointment in the legislation of the government of Texas by pro-choicers.  As my Facebook and Instagram feeds became inundated with outrage for the law, it became even more apparent that the legal status of abortion is not the issue.  Instead of fixing the problem, it seems to have caused an even greater rift and division in society.  The problems go deeper than can or can’t.  It is about will and won’t.

How have we come to this?  How can people, especially women, be so willing to even consider the possibility of ridding her body of the innocent child in her womb, essentially killing her unborn baby?  We as a society have found ways to get immediate gratification for our desires without any thoughts of the long-term effects of our actions.  But methods we have manufactured to fix the consequences in a broken society are merely bandages that cover the surface.  Yet the wounds run deep, without any sign of healing.  And as we continue to hemorrhage out the very dignity of the human person, we are barely clinging to life as we attempt to hold on to the ideals that diminish our humanity.

The paradigm shift began in the 1960s and spilling into the 1970s.  The babies born around the time of World War II were now adolescents and adults who rejected the conservative values set by their parents.  The sexual revolution began, along with the first FDA-approved oral contraception and the eventual 1973-ruling of the Supreme Court case Roe v. Wade which ruled that women had the right to an abortion.  The 1960s also brought about the second wave of the women’s rights movement in which women fought for equal opportunities and equal pay as men.  Women felt empowered with the ability to control their bodies and to achieve success in ways that historically was not allowed.  Children would be seen as a hindrance to achieving goals.  The option to not have children also gave women the freedom to be as promiscuous as their counterparts without fear of consequences.

As women have striven to become more valuable in positions outside of the home and worked for equality with their male counterparts, the value that they hold as women have been reduced to mere objects of fantasy and pleasure.  As Pope Paul VI predicted in his famous Humanae Vitae (Of Human Life), in the widespread use of contraception, “men may forget the reverence due to a woman, and, disregarding her physical and emotional equilibrium, reduce her to being a mere instrument for the satisfaction of his own desires, no longer considering her as his partner whom he should surround with care and affection.”  In continuing the opening verse, Jesus, Himself, said “for if these things are done when the wood is green what will happen when it is dry” (Lk 23:31).   The option to not only prevent fertility but to terminate pregnancy without any regard for the long-term emotional and physical side effects has created a free-for-all perspective.  There is more sense of entitlement for physical pleasure, unaware of the emotional bond that the sexual act brings between two people.

The desire for control has also played a huge roll.  The on-going mantra for “My body, my choice” has rung loud and clear all over the world.  Yet, studies have shown that a majority of women felt pressured into having an abortion, expressing that they did not freely and willfully choose to terminate their pregnancy.  The pressure to do so came from the partners themselves, or other family members, including parents, or even friends.  While women fight for the right to control what they do with their bodies, abortion has also been used to control women.

The mental health consequences on abortion that are not discussed.  There are several reports that claim there is no increased incidence of depression and anxiety in those who had undergone elective/induced abortions.  Yet, there are studies that show that women who have abortions the risk of Post Abortion Stress Syndrome, the term given to those who suffer from post-traumatic stress following an induced abortion.  In the study, it states that “women while terminating pregnancy are not aware that they will require psychological support later due to subsequent psychological effects they experience.”

It must be stated that abortion is not often an easy decision to come to.  In his encyclical Evangelium Vitae, Pope Saint John Paul II recognized that this choice is often made out of fear, either for her own health and safety, for the sustenance of the family, or fear of the environment the child may grow up in.  Pope Francis acknowledged that “there is no sin that God’s mercy cannot reach and wipe away when it finds a repentant heart”.

The true underlying issue is that from a young age, girls and women are not fully informed and girls, from a young age, should be encouraged to see the beauty of themselves without needing the validation of a relationship.  The solutions to fix the problem after the issues have occurred is prominent.  There are many reports that hormonal contraception is safe and effective.  Yet so few women actually know how the hormonal contraception works on their bodies and the risks that they take, especially with long-term use.  The abortion narrative has been pushed, seeming to be an easy solution, and the abortion clinics who profit push the hardest.  Women who have undergone abortion later state that they were not informed enough or taught enough.  They were never shown an ultrasound of their babies, are unaware of the risks they are taking undergoing the procedure and were never told of other options.  This battle for control is to the point that violent attacks and vandalism has occurred between pro-choice and pro-life advocates.  This has become a war between a mother’s right to choose to live her life as she pleases and a child who never got to choose to live.   St. Faustina, herself, a mystic and doctor of the Church, felt the unrelenting pain of the unborn children which no modern medicine of the time could relieve or cure which Christ had revealed to her.

If only women could see their value beyond the superficial and see the another much deeper truth of “My body, my choice.” If only that mantra could be transposed to choosing to value their bodies so as to not give it to whomever as they seek for the immediate gratification of lustful desires or the need to quench the ache of loneliness and affection.  If women could just not to give their bodies to those who desire them only for a meaningless moment of pleasure and refuse to see the gift they truly are. If only women would truly know the miracle of the natural order of their bodies, their ability to conceive as an indication that there are things going right with them and nothing as wrong; that their monthly cycle is a method the body cleanses itself in order to stay healthy.   If they could understand the heartache for the women who realize could not choose to have their own child as they struggle through the pain of infertility.  If only others could understand the beauty God had created so they could cherish their beauty deep down to their soul and not just to satisfy the flesh.

What it all comes down to is love, the greatest Commandment.  In the book of Matthew, Jesus tells us to love God... love others, and to love ourselves in this very order.  Now our society has diminished and even rejected a love for God, and the love for ourselves has become the most important without regard for others.  The love we have for ourselves has become conditional, dependent on the superficial ideals society has placed on us rather than to accept who we truly are.  We have chosen artificial means to ensure we continue in our own selfish desire.  If only we learned to give ourselves in love, not lust, and to act in love toward others could be the key to making abortion unthinkable, regardless of legality.