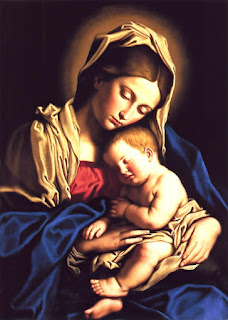 It is no secret that in this modern age, women have risen above and beyond what they were historically able to do.  Women fought for rights that society did not give.  In some ways it is a great time to be a woman because women have been given a voice they once did not have.  But on the downside, in order to fight for equality with men, women seem to have rejected what truly makes them feminine.
In a recent blog post, my ministry partner, Carlos, beautifully illustrated the courage of our Blessed Mother.  A young girl, pregnant with a child that is not her betrothed's.  A young girl who faced rejection and the possibility of death.  Yet she was courageous enough to say, "Behold, I am the handmaid of the Lord. May it be done to me according to your word."  She was willing to risk everything, the life she was about to have, risk losing the man she loved, because of the calling God gave her.  And even Saint Simeon told her of the suffering she would endure as the mother of our Lord, the heartache, the struggles, she never relented her role.

A stranger that I had recently met revealed to me that she had her daughter as a teenager.  She told me it was difficult in the beginning, but she wouldn't trade it for the world.  My response to her was, "Well, you were able to give your daughter a life."  Knowing that could have meant anything, she admitted, "Yea, I could have had the choice.  I didn't listen to other people.  My dad wasn't happy."  I wasn't expecting the conversation to turn in that direction, but it did.  My heart burst for this woman whose daughter is around my age.  Was she afraid? Of course.  To raise child to live at a time you have barely begun to live your own life.  It is a scary thing, a challenge. 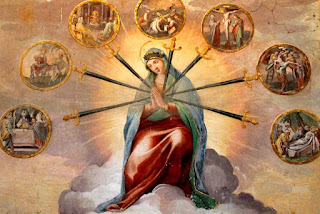 This wasn't the first and it is likely not to be the last conversation I have had where a woman has admitted that at the time they got pregnant, the circumstances caused them to consider the alternative... and the only alternative they could see was to give up the life of their child.  But they knew they could not live with themselves had they done it.  They all talk of the difficulties they faced, the backlash, the criticisms, the scrutiny.  But they all saw the blessings as their children grew older.  Their children were the reasons they strived to become better.

But what these stories bring up is the issue of choice. About 64% of women, more than half, the majority, felt the pressure to abort their babies from others.  They didn't feel they had a choice.  They are forced to believe that they will only succeed of they do not have a child, making a decision they later regret. I know of a woman who got an abortion in her 20s who was not able to conceive another child after.  Now in her 40s she talks about it saying, "I think God is punishing me."  Whether of not that is the case can only be known by God.  What is apparent is the guilt she felt.  That though she was acting out of fear and desperation in that moment, looking back she regrets it.  What pushed her were the social pressures and fear of her family.  Yet it is being marketed as a woman's right to choose what to do with their own bodies.  But who never got the choice was the one innocent party in the whole situation.  That child created in the womb is completely another human being, with its own unique DNA sequence, separate from the mother.

The issue lies in the perception that society gives.  We have been pushed to believe in a narrative that degrades the beautiful creation that women are, without giving the proper education on the effects that it can have on their bodies, or even their hearts.   Multiple resources will state that the pill is "generally safe".  Some studies have shown that the use of hormonal contraceptives for more than 2 years increases the risk of miscarriage and ectopic pregnancies.  There is also the increased risk of breast cancer, stroke, heart attack.  Yet, the use of artificial contraception is so widespread, women don't think twice about what it could possibly be doing to their bodies.  In order for the pill to work, it essentially "shuts down" a functioning part of the woman's body.  The ability to have a child means that the woman's body is working correctly.  Yet, instead of caring for their fertility, it is rejected, sometimes temporarily, sometimes permanently.

In his encyclical, Letter to Women, Pope Saint John Paul II, he recalls Mary's willingness to serve the Lord. "Through obedience to the Word of God she accepted her lofty yet not easy vocation as wife and mother in the family of Nazareth. Putting herself at God's service, she also put herself at the service of others: a service of love." He recognized the difficulties of our Blessed Mother.  Mary, our mother, is the example for women everywhere.  She faced similar struggles.  She faced heartache and heart break.  Yet she continued to love the child conceived in her womb beyond the moment He gave Himself for the sake of the world.  She accepted her position despite the hardships; the threat to hers and her family's lives; having to escape to a foreign land to ensure the safety of her family.  But what we must also remember is that she did not do it alone.  With the love and help of her husband, Saint Joseph, she was able to safely and diligently raise the Son of God.

In the same way, those who are facing struggles need help.  Women do not make the choice to rid themselves of their babies easily.  It is often based on fear; fear of others; the lack of support; the lack of a loving environment and loving home.  Once when I volunteered at the hospital, a doctor asked me to be with a teenager giving birth.  Her mother said no one could be there with her while she delivered her baby as a punishment. The gratitude she had toward me, and the emotions I felt for this girl who at the time was not much younger than me.  I applaud her for keeping her baby, even with what I assume continued to be a lack of support.  Perhaps it was the mom's way of saying "Your baby, you raise him/her."  But I think of her often, hoping and praying that she was able to come out of the hole and provide a good life for her child.  It is during this time of transition for mothers that they need the most support.  It was very apparent during the pandemic as the isolation increased the incidents of post-partum depression and anxiety. Women felt the lack of support. 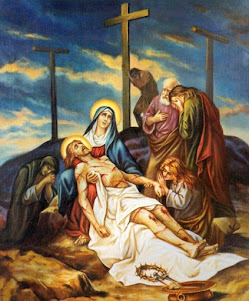 If there is one example of a woman, we must turn to our Blessed Mother. Her strength.  Her compassion.  Her faith.  Her capacity to love, not only her husband and her child.  She loved the world.  She accepted the world as her children.  What mother would not try and stop the Crucifixion?  What mother would stand by weeping on the side while her child gave their life to the world?  She is the ultimate example of faith, someone who accepted the will of God even in the face of heartache.  By the same token, we as a society must turn to the example of Saint Joseph, the one who loved her, supported her and protected her while she carried and raised her child.  If only we could provide the education, the support, and the resources to those who find themselves in this position, we may be able to save more unborn.
Resources for the Promotion of Life:
Heartbeat International
- Fights the legal system to push for pro-life laws and provides resources for pregnancy.
Human Life International
- International Catholic Organization that works to teach communities and community leaders around the world to promote a pro-life world
Live Action - Prolife Resources
- Links to the abortion pill reversal, resources for adoptions and more
Optionline
- Provides resources and options for those with unplanned pregnancies
Rachel's Vineyard
-  For those suffering from the emotional after-math of abortion
Vitae Foundation
- Conducts research and promotes a culture of life
Angelica Delallana, MSN, RN, FNP
Co-founder Humana Corpus Dignitate
hcdtalks@gmail.com
Creighton Model Fertility Care Practitioner Intern
http://www.womanswell-la.com