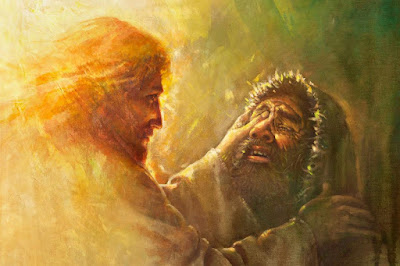 We all live our lives vaguely aware of the issues around us.  Then with time, we become desensitized, we it take for what it is, accepting the situation as the "norm".  We are unable to see where it is hurting us, and where it is pulling us away from God.  Even if we are not doing anything wrong ourselves, we become immersed in this environment.  It is only when we pull away for some time and look back do we actually see where it may have been toxic.  As they say "hindsight is always 20/20".  How much more do we see clearly when we have faith?

I remember the week after the Catholic Marketing Network conference in Chicago this year.    We had spent 5 days among other Catholics.  Not just any Catholics, but Catholics on a mission.  We met so many wonderful people in ministry, heard some great speakers.  We saw some good friends.  The conversations we had that week were deep, awe-inspiring.  Carlos and I both got to our respective homes and began to re-evaluate some things in our own lives.

For me, it was how much more I could live out my faith.  It changed the way I prayed, the way I saw Mass.  The reverence in that ballroom as we prayed as one, first the Rosary, then the Divine Mercy chaplet, and then said Mass, humbled me in so many ways.  It also showed me how much more I needed to be the example to my kids, to show them how to live out their own faith.

For Carlos it was re-evaluating his musical endeavors.  In order to support his family, he became a working drummer, joining bands and playing late-night gigs.  Less than 24 hours after landing home from Chicago, he was back at one of these venues to perform and do his job.  Before this, he had already expressed several times how much being there weighed on him; that though he did not partake, he was surrounded by the things and others whose values went against his own Christian values. But this time, he saw it differently.  It was through a spiritual awakening that his eyes were opened; this time he found truth through a heart of faith. While others were mingling and doing what they do, he called me and asked me to pray with him. Outside from across the street of this venue, he sat in the silence of his car and prayed the Rosary with me.  A few weeks later, he told me that as he was putting his drums away, he prayed and said, "Lord, there has to be another way." It still took a lot of discernment on his part.  He was about to let go of something that had been a a part is life for decades.  It still took months of back and forth, between his head and his heart. But eventually he listened to God's call to go elsewhere.  It took a leap of faith, but he finally decided it was time to let go and accept a new way of living and thriving.  The moment he said "Yes, Lord, I am listening," God answered his prayers.  Just as the blind man said to Jesus, "Master, I want to see."   Jesus replied "Go your way; your faith has saved you."

It is in our nature to continue in our ignorance.  As St. Paul said in his letter to the Hebrews, even the high priest, "is able to deal patiently with the ignorant and erring, for he himself is beset by weakness." None of us are perfect.  But with God's grace, with willingness to follow, He will call all of us in our own time to come out of our ignorance.  Even Jesus did not choose for Himself, it was the willingness of the Father.  St. Paul emphasized that even Jesus, Himself had not "glorified himself in becoming high priest, but rather the one who said to him: You are my son."  We are all called in our own time.

What is revealed when our eyes are opened can eventually be used for the good of others.  Whether it was my work in aesthetics allowing me to see the plight of women struggling to remain societally beautiful on the surface in order to be accepted;  whether it's Carlos having to let go of something that had been part of his life for nearly 3 decades. There are are stories of those who are given sight by being immersed in the midst of sin and enlightened to truths.  Even Saint Paul, himself, former persecutor of Christians.  By the grace of God, we can see again.  But it takes faith, and it takes our willingness to ask the Lord to heal our blindness to give us the clearer vision of the truth.  And then "I will gather them from the ends of the world, with the blind and the lame in their midst, the mothers and those with child; they shall return as an immense throng. They departed in tears, but I will console them and guide them; I will lead them to brooks of water, on a level road, so that none shall stumble."