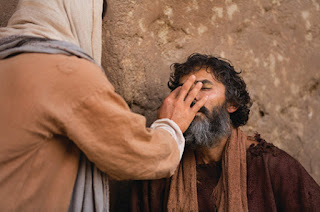 All of us have been plagued by false accusations and rumors at one point in our lives.  Our abilities or our characters have been judged, or misjudged, sometimes unfairly or maybe even overestimated.  Regardless, when we look at someone at the surface, we are missing something.  The misconceptions have been even more skewed by social media.  We only get to see a glimpse of someone's life, and often the life they want us to see.  But in the end, God knows.  As God said to Samuel "Do not judge from his appearance... Not as man sees does God see, because man sees the appearance, but the Lord looks into the heart."

Even if we show others that we pray, we go to Church, we do everything according to the book, God knows the sincerity in which we do things.  He also knows who we are in our own hearts.  He knows who lives as children of the light.  And that light can shine forth from us.  How can that light come alive?  By our belief in Christ.

Both the first reading and the second reading come together in the Gospel, where Jesus heals the blind man.  The beginning of this Gospel struck me.  It was assumed that either the blind man or his parents were sinners because of the congenital blindness he suffered.  But when Jesus was questioned as to who was the sinner, Jesus answered them "Neither he nor his parents sinned; it is so that the works of God might be made visible through him."

First of all, Jesus was putting an age-old belief to rest.  That it is no one's fault that he was blind, but that is how he was created.   But just because he was born with what could be considered a handicap, it does not mean that he could not be destined for something greater.  In his case, it was to show the healing power of our Lord.  Whatever could be considered a weakness to others, God can use it for goodness.

Carlos and I had once spoken of this part of the Gospel because each of us our eldest sons are on the Autism spectrum.  When my son was going through the process of diagnosis, there was a lot of self-doubt and self-blame.  I start to question why this is happening, and what I or any of us could have done to cause it.  It was a blessing to have Carlos there because I was able to ask him questions having had gone through it before.  What is more, although they are very different and have very different personalities, they also have similar traits and manifestations.  But if there is one thing both of us have seen, it is what a joy and a blessing each of our sons are.  And although there are some challenges, there is a pureness to their hearts.  They challenge us to be better as people and as parents.  Both of them are always trying to do good, do the right thing.  They love rules and go by the rules, keeping us in line and keeping us honest.  They helped us to see the world in ways we never would have seen otherwise, removing our blindness. What man will see one's as weakness, God can use as one's strength.

The second thing is that we as Christians will constantly be challenged because of our faith.  When the Pharisees questioned him, the blind man challenged their claims saying:

"This is what is so amazing, that you do not know where he is from, yet he opened my eyes... It is unheard of that anyone ever opened the eyes of a person born blind.  If this man were not from God, he would not be able to do anything."

For this he was thrown out.  Now, more than ever, our faith is being challenged. Church teachings have always been scrutinized, but they do not go along with the current "rules" of society.  But Jesus heard of what the Pharisees did to him and went back to him.  Jesus asked him, and he professed his own faith in our Lord.  His faith helped him to see.  His faith helped him to understand.  Jesus saw the sincerity in his heart.  And in that belief, in that sincerity, the blindman enlightened the world to the mercy and power of God.

Instead of our "knowledge" blinding us by the current rules set by the times, let us look for the truth in our Lord Jesus Christ, to give us a the abstract understanding.  Let us open our eyes to the love of God, allowing Him to enrich and enlighten us. In turn, let us be that light to the world that is so necessary, especially in the darkness of times.