HCD at the REC

This past weekend Angel and I attended the Religious Education Congress in Anaheim, CA. It was not the first time either of us attended the event as she was there in 2019 and I had been there a number of times over the years both as a CA resident and once after I had relocated to the Tucson area. Still, it had been about 14 years since I had last attended the event so I was very excited to return this year, especially since I was now going to be with my partner in ministry. That was why we had decided to get some polo shirts made with the amazing logo that Angel had come up with so we can share what we are doing with others both visually as well as when we had a chance to speak to them.

I was very proud of the reaction we had from those who saw our shirts. Angel is great at visual art so I was not surprised to see how much people liked the logo. Our purpose was to hopefully bring attention to our ministry. Over and over people approached us and asked about our ministry and in many cases they were really excited to hear about what we were doing. We had a chance to speak to theologians, catechists, medical professionals and so many people in different ministries who were excited to see our vision of combining theology with medical science. So many said that it was one of the many things that we need right now as the the distance between religion and science continues to grow. It also gave us a chance to tell many of the locals about our retreat at the Daughters of St. Paul Media Center that is scheduled for Saturday March 21st.

It was great to be able to have some time in the presence of the great speakers that are brought in for the REC. From Bishop Baron to Fr. Robert Spitzer who are two great teachers that I tend to watch a lot on You Tube was an even greater experience in person. Then there were those impromptu conversations with vendors to people we would randomly meet who were also on fire for their faith who sought out the company and resources of those with a similar passion. So many of them had some great information to share and were very inspiring to say the least.

One the things I missed the most from my time living in the Los Angeles area was the multi-cultural environment. Prior to becoming a student of the Theology of the Body I was very interested in what some call Third World or Global Christianity. I was always fascinated by the theologies and faith expressions by my Catholic brethren from other countries so to see the Ethnic Ministries display again was like a homecoming for me. It is always exciting to see the beautiful art that was displayed along with learning about the saints and martyrs that they were celebrating as their wisdom and courage is just as inspiring as all that we know of the more high profile saints and martyrs.

Aside from attending the amazing talks and witnessing a variety of activities we were also able to spend some time with great friends who are also partners in ministry. It was great to catch up with some old co-workers while also meeting some of the people they are working with now who are also in the same profession as us. Hearing their struggles along with their blessings gave me a great sense of solidarity with people I have longed cared about as we can see how much we are still in this work together. Of course hearing all of the great things going on in their family lives was also a great joy to me because these are good people who deserve an abundance of blessings.

Overall, the weekend was worth the exhaustion that it brought both from all of the walking as well as all that we learned and exchanged through many hours of networking. It gave us the sense that we were on the right track while also giving us new ideas in terms of what we needed to do to further our ministry.

It also encouraged us for some other future plans. We will be attending the CMN Momentum Conference in Dallas this coming July, the Arizona Marian Conference in Phoenix this coming August while booking more talks and retreats through the rest of the year.

As we can see, the work has just begun but we are blessed and encouraged to be where we are right now. 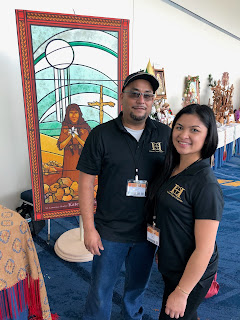