A great story features a hero that faces a challenge that seems insurmountable before succeeding in the most amazing way. It is meant to inspire us and make us believe that we are capable of the same type of victory if we just believe that we can do all that our hero did.


However, in the real world there are consequences and the opening of Rocky 5 makes perfect sense when we find out that Rocky has in fact suffered brain damage even though he won the biggest fight of his career. To make matters worse we find out that his accountant took advantage of him while he was grieving the loss of his friend, which led to him losing millions of dollars.

In most cases a spouse of such a person would be just as livid as the one who was ripped off but if we remember the events that occurred before this unfortunate act we remember that Adrian actually had even more reason to be upset with Rocky. That is because he didn't even consult with her prior to agreeing to participate in such a dangerous fight and then ignored her when she pleaded with him not to go through with it. Realistically, no one would have blamed her if she packed her stuff and took their son away in disgust since Rocky's negligence removed them from the comfort and security of the life that they were now accustomed to.

However, we already know from the previous blog in this series that Adrian has always seen Rocky the person and since he was now in a debilitating state in terms of what he could do physically she is not concerned with all that they had lost. In fact, it was at this time when he had never been so down that she began with what is probably the most beautiful exchange we see between the two characters in the entire series:

Adrian: Rocky. Do you love me?

Rocky: Yeah, I love you, you know. Why do you ask that?

Adrian: Because if you love somebody you live with them, you live for them. You don't gamble with a life. Rocky, I don't care about the money. It's you. That's all that matters. Please. We'll be okay. We'll be fine.

There was no, I told you so! Or, why didn't you listen to me? Or, see what you cost us by making such a stupid decision? Adrian Balboa really understands what it means to live in the good times and the band times. https://www.youtube.com/watch?v=LelD80gDKRI

Adrian lives in the here and now and by doing so she looked at the man that she loved and not the decision that she firmly disagreed with. He had no problem believing the sincerity of all that she said because throughout the series we have seen that it was always about the two of them being together in that bond where they always willed the good of the other while living the call of agape.

Sadly, Adrian's commitment was not enough to deter Rocky from looking for something else that he thought would refill the fortune that he lost. Perhaps he was so used to being in the spotlight or felt bad for losing everything he had earned during those moments in the spotlight. Whatever it was, we start to see a determination on his part to get it all back once they return to their old Philadelphia neighborhood.

Soon he would start training a young boxer who moved his way up the heavyweight ranks and once this young star was in a position to earn a title shot Rocky felt he was close to regaining the respect that he once had as champion. The problem was that he didn't realize that he didn't need wealth or material things to prove his value to those who mattered most to him. He already had all that he needed from his family who he was now in danger of losing.

Rocky was so consumed with taking his young fighter to the top that he didn't offer his son the attention that he needed as he was entering his teen years. Adrian watched closely and patiently and dropped hints here and there to try and redirect Rocky's focus but nothing registered until his son blows up on him out of frustration. Rocky was crushed by son's pain but still didn't fully understand why his son felt the way he did.

Unfortunately, Rocky wasn't ready to hear the truth until he lost everything, again. After he has a falling out with his young protege he stood in the middle of the same street where it all started for him and even went as far as identifying himself as: Balboa, just another bum from the neighborhood!

Enter Adrian to once again remind him that he was more than he realized.

At the moment when Rocky confessed his inadequacies and how he is without any respect Adrian grabbed her beloved husband and reminded him that she respected him because she had lived every battle and struggle with him. She knew all that he endured because she suffered with him. She then explained that he survived those challenges because of his heart, the special gift he had that was like no one else. His heart that propelled him to victories in the ring was the same heart that loved her and their son without question.

After reminding Rocky of the gift he had already shared with others she then laid out some tough love for him. He was not looking in the right direction and by doing so he was hurting the last person he should be hurting, his son! In her words: If there is something you want to pass on pass it on to your son. For God sakes, your son is lost! He needs you!

In other words, his value didn't come from passing on his boxing knowledge to a future champion because there is no point in being a successful trainer if he neglected his duties as a husband and father. It was time for Rocky to get his priorities together and while Adrian was direct with him she still didn't threaten him or offer some type of manipulative ultimatum. Her cry was one of desperation and it was timed perfectly since she waited for the moment when Rocky would actually hear and understand what she had to say.

Rocky's recognition of Adrian's intention allowed him to reach for her in order to comfort all of the pain she had been feeling while coming clean with what he needed to say to his faithful wife: I'm sorry. There was always you and me. There was always you and me. I'm sorry Adrian. He too remembered all that they have been through, the good times and the bad times, and had never forgotten how he was not the only one that was on this journey. https://www.youtube.com/watch?v=uf63ZubculE

This is one of the most intimate moments we ever see between the two of them because it is filled with love and forgiveness. Adrian certainly held a lot in but once she let it out she reached for Rocky before an apology left his lips. She knew this man like no one else. She knew that he loved her and their son and that he would do whatever he needed to do in order to take care of his family. Aside from that, she also knew that when she spoke to him that he would listen. Rocky can embrace his wife without hesitation because he knew that when she was direct that it was from her concern for him as well as their family because he too knew how much she loved both him and their son.

Interestingly enough, while this movie is the least appreciated by Rocky fans because of what it lacked in action it actually served as a beautiful conclusion to the relationship we see between Rocky and Adrian Balboa (more on that in the final blog of this series). We see a couple who first recognized the good in the other at a time when neither of them saw that in themselves. One they got married they confronted each challenge together especially when it came to working out their differences. When their surroundings changed their commitment to each other remained and that was best expressed when they not only forgave each other but also loved each other during those moments when it wasn't easy to express that love. So as we get to the end of Rocky 5 we have a clear picture of how much the Balboas mean to each other and how that love would never fade away.

Their marriage is an example of what a permanent marriage should be. Yes, it existed in a fictitious universe but it is in the teachings of the Theology of the Body where Pope Saint John Paul II reminds us that the desire for authentic love is best expressed in art. The films in the Rocky series are no exception. 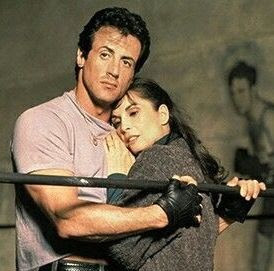